Bacteria-induced diseases of humans, animals and plants are the cause of great suffering and severe losses in agriculture. Yet, chemical mediators of virulence have remained elusive in many cases. Common reasons for this lack of knowledge are that biosynthesis genes for secondary metabolites are often down-regulated under standardized cultivation conditions, and that in the pathobiological context only minute amounts of the virulence factors are produced. Furthermore, the infection process can be strongly biased by the host's microbial flora. In this project, we will explore bacteria-induced mushroom diseases as a general model for infection processes. We will study the impact of host-associated microbial communities on the host colonization by pathogens.

Specifically, the study system involves a cultured mushroom (Agaricus bisporus), which serves as host for bacterial pathogens and helper bacteria. We aim at monitoring the chemical mediators involved in the infection process by a combination of imaging mass spectrometry and deduction of chemical structures from genetic information (genome mining). Furthermore, in cases where the gene expression is triggered by the host-pathogen interaction, we will study the mechanisms that trigger the biosynthesis of the secondary metabolites. On a higher level of complexity, we will investigate the modulation (synergistic/antagonistic) of bacterial pathogenicity in natural and artificial biosystems. These consortia are composed of a mushroom host, the bacterial pathogen, and an antagonistic (helper) bacterium, which is capable of detoxification. In close collaboration within the CRC we will also study the effect of the bacterial signals on fungal (mushroom) hosts, the global changes in the bacterial transcriptome and proteome, and explore the role of biofilm formation in the interaction of bacteria and fungi. 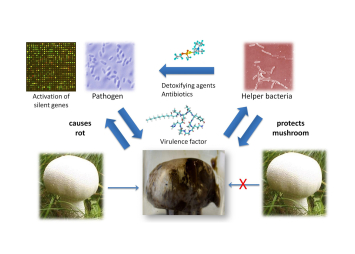 We expect to gain first insights into complex regulatory mechanisms in infection processes and to elucidate the chemical mediators that modulate the composition of the association. It should be highlighted that due to the complexity of the system and the broad range of methods and expertise required for the analyses, the project can only be brought to fruition in close collaboration within the CRC. Beyond providing insights into the molecular basis of mushroom diseases, which cause devastating losses in mushroom farms, we expect to learn general principles of multipartner interactions in infection processes in a much broader context. Last but not least, from a translational point of view the chemical mediators employed by the fungal pathogens and the antagonistic bacteria may be employed as antibiotics or biocontrol agents in medicine and agriculture, respectively. 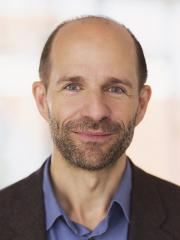 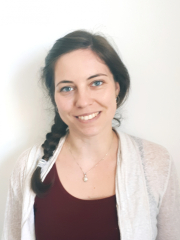