Chemically mediated interactions in communities are often achieved by signals released by microorganisms. This will result in a patchy chemical landscape with local concentration maxima around the producing organisms. Nevertheless, most bioassays rely on the testing of solutions of candidate molecules that are administered in average concentrations found during the analysis of the producing consortia. A patchy chemical distribution with defined gradients might however result in completely different community responses. This project aims to overcome shortcomings in established assay procedures by developing and administering tailor-made polymer microcapsules with defined release properties. Release of active agents controlled by external stimuli, like changes in pH value or irradiation with light of certain wavelength, can be reached through the application of responsive polymers. In the present project two approaches for the design of stimuli-responsive polymers will be followed. Based on poly(methylmethacrylate) (PMMA), tailor-made copolymers will be developed which (1) have tailored pH release profiles (stable at high pH value and dissolving at low pH value) or (2) are degradable by irradiation with light of certain wavelength (by introduction of photo-responsive bifunctional methylmethacrylate crosslinkers). 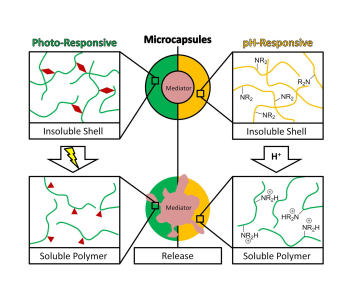 Schematic drawing of polymeric structures for the encapsulation of chemical mediators and their release. Left: triggered by light (exemplified for photo-cleaveable crosslinkers). Right: by decrease of the pH value.

For each approach copolymer libraries will be produced, in order to achieve an optimization of the envisaged properties (e.g. solubility, density, responsiveness). Microcapsule formation from the differently responsive polymers and encapsulation of specific chemical mediators (metal salts or small organic molecules) has to be investigated employing different techniques (e.g. precipitation polymerization on metal salt microparticle templates, double emulsion technique, interfacial polycondensation of oil-in-water dispersions or photoinitiated radical crosslinking during double emulsion formulation). The properties of the resulting micro-capsules will be investigated in detail (size, stability, loading capacity, responsiveness to pH value or irradiation, etc.) applying forefront analytical techniques including Raman spectroscopical methods developed in Z02. Further studies will include the cell toxicity screening of the polymers, microcapsules and their possible degradation products. In close collaboration within the CRC, microcapsules will be optimized for the pH-controlled release of iron ions at specific positions of insect guts B03. The photo-triggerable release of organic chemical mediators will be investigated within the collaborations with C01 , A04, C02, C03 and B06, elucidating the possibility to apply the fabricated microcapsules as point sources of chemical mediators in laboratory and field environments. Other consortium members will also have access to such tailor-made polymers to trigger communication processes with close to natural concentration gradients. The obtained results from the collaboration within the CRC will also yield information about the biocompatibility of the polymers, microcapsules and their degradation products towards microbes, cells and organisms. 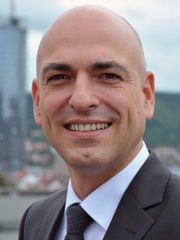