This project focuses on the role of secondary metabolites as mediators of the complex plankton community structure. Plankton comprises any organisms that live in the water column and are incapable of swimming against a current. Numerous species of these often microscopically small organisms co-exist in the water columns and the species diversity in the homogeneous environment has fascinated scientists since the early days of microscopy. Besides fluctuating resources, chemical signals have more recently been identified as key players in the shaping of communities. But even if we know a few metabolites that have the potential to influence single species the role of such metabolites in structuring a complex community is still little. The starting point of this project is the observation that certain bacteria can lyse algae within a phytoplankton bloom to potentially exploit the released resources. The lytic bacterium Kordia algicida is capable of lysing entire algal blooms thereby massively influencing plankton dynamics in the sea. Lytic activity is controlled by quorum sensing type signaling and relying on the release of extracellular digestive enzymes, such as proteases. However specific algae, such as the diatom Chaetocerous dydimus are resistant against these bacteria. We will now follow up initial evidence of an induced resistance of the alga that releases proteases itself once it gets in contact with exudates from the bacteria. 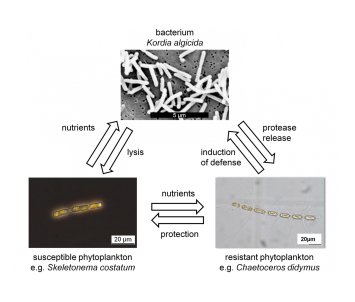 Established and hypothetical interactions of the algicidal bacterium Kordia algicida with resistant and susceptible diatom species.

We will characterize the signal perception and the mechanism of induction of the chemical defense. Therefore we will use bioassay guided structure elucidation to identify the cues from K. algicida that are perceived by the algae, further we will explore the full metabolic response of the alga to identify mechanisms of adaptation besides protease release. This response will be characterized using elaborate GC/MS and LC/MS comparative metabolomics with a broad coverage. Our studies will also explore the role of lytic bacteria in a mixed community of susceptible and resistant alga species. Here we will follow up on initial results that indicate a substantial amount of heterotrophy in marine microalgae. We will extent the above described metabolomics platform established for the alga/bacteria interaction using by isotope labeling techniques. This will allow following up the fate of nutrients released by the lysed alga. Thereby we can monitor if the resistant alga benefits from the activity of the lytic bacteria. We will also explore the role of competition between these two partners that potentially exploit the same resources. Experiments will initially be conducted in lab experiments where microcosms for co-culturing of plankton species and simple communities are available. Once the responses are characterized and methods are in place we will conduct full-scale mesocosm experiments during phytoplankton blooms to find out more about potential cascading effects on the entire plankton community during events of bacterial control of blooms. Mesocosms will be selectively enriched with lytic bacteria and / or resistant algae and the performance of all introduced partners as well as of key players of the natural plankton community will be monitored. Using this elaborative approach we will be able to explore the potential complexity of plankton signaling and learn more about approaches for ecosystem conservation as well as for large scale industrial culturing of microalgae. 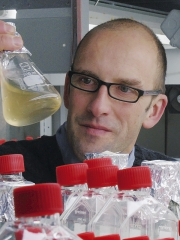 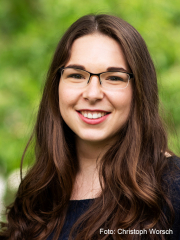 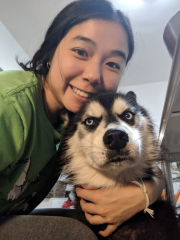