Metallophores as Mediators for Metal Cycling: Profiling and Ecological Evaluation of Ligands Involved in the Microbial Cycling of Iron in Complex Systems

The biogeochemical cycle of iron is tightly coupled with the storage and cycling of organic carbon including electron shuttling, complexion and adsorption processes. Mechanisms underlying the excretion of iron chelating organic compounds such as siderophores have been studied extensively in various microorganisms that utilize iron for assimilation, e.g. Pseudomonas spp. Although less intensively studied, chelating compounds play also a role in the dissimilatory cycling of iron. The Fe(III) reducer Shewanella oneidensis MR-1 is known to produce organic ligands for the sake of iron respiration, and the Fe(II) oxidizer Sideroxydans sp. strain ES-1 is supposed to produce a dissolved Fe(III) complex to avoid cell encrustation. Although these chemical molecules could not be identified so far, it could be demonstrated that the affinity of the ligand to iron affects the reaction rates for both reduction and oxidation reactions, indicating that complexing ligands will have a signiﬁcant impact on the reaction rates of microbial-mediated iron cycling in multi-organism communities. Since these microorganisms occur in organic matter rich environments like a peatland, the natural occurrence of humic compounds will add another component to their interaction. We hypothesize that competing effects between organic chelators with a very high affinity to iron like siderophores secreted by some of the interaction partners and exogenous organic ligands will affect rates of Fe(III) reduction and Fe(II) oxidation. The binding strength and redoxpotentials of the different Fe(III) complexes formed should be responsible for differences in the rates observed. 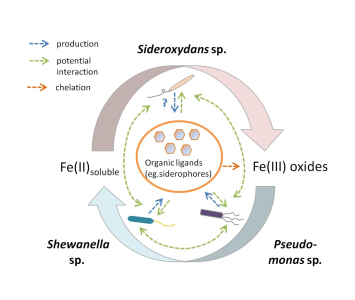 Scheme illustrating the interaction of three microorganisms involved in the cycling of iron and the important role of metal ligands acting as chemical communicator in a complex system.

We will use a metallophore typing approach based on in vivo stable isotope labelling, a library of synthetic chelating agents, voltammetric techniques and a metatranscriptomic and proteomic approach to study biological processes in a manipulated system. To further understand the regulation of ligand production and their effects on rates of oxidation and/or reduction, we aim to inactivate the genes responsible for ligand production. Thus, we will take advantage of an interdisciplinary approach starting with the identification of the unknown chemical mediators in a complex biological system, followed by the chemical synthesis of the identified chelating agents and some known model compounds with different chemical properties, and then testing their effect on a mixture of bacteria in an experimental set-up that allows different combinations and manipulations. Chemistry will provide the tools in a project rooted in microbiology to elucidate the heretofore unknown identity and characteristics of metallophores involved in microbial iron cycling. This unique combination of chemical and microbial approaches and expertise is only possible in the CRC of ChemBioSys 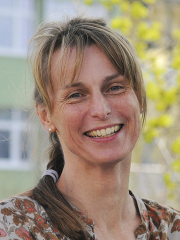 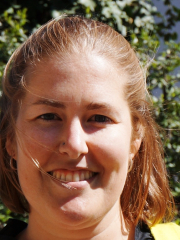 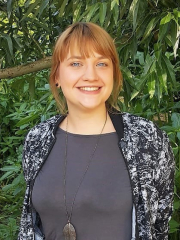